The last three days have been so interesting. The official Orientation events have been fairly low-key so far but they have definitely been informative.

Its been fun getting to know people. Our class is about 120 people, 20 of whom are people who are repeating the prior year. We were also divided into five groups of about 20 odd people and these are the groups we will be having all of our classes with.

I really like the people that are in my group that I've met and talked to so far. They all seem like smart and determined people and I look forward to getting to know them better.

I'm definitely the oldest person in my group though. However, I was pleasantly surprised to see that its not all 18 years olds like I expected. In fact, in my group there are only one or two 18 year olds and the rest are all in their early twenties, even a couple that are 24.

We also had some talks from the professors of Anatomy and Histology - the two core subjects and the hardest ones that we will be having this year. Its one or both of these subjects that lead to people failing and repeating the year.

At first I got a bit panicked because I found out that last year only 40 people passed the anatomy final on the first attempt. But then I found out there are three attempts, so its not THAT dire. That said, 20 people did not pass any of the attempts. And I could tell from the presentation that its a class that is going to move incredibly quickly and in order to be successful I'll need to be incredibly consistent with my studying.

Something found a bit odd though was how much time was spent talking about missing classes and/or exams and the proper protocol for obtaining and submitting doctors notes for absence due to illness. To me it seems obvious that missing class in medical school should only be due to extreme illness or emergency. I don't know, maybe its because I'm older and know that in the real world you can't just have a cold or headache and not come in to work or because you don't feel like it. But clearly this was a problem in the past since they stressed it some much.

One thing for sure, is that these past few days have made me excited to start classes - even though we will have our first test on Thursday!

On a totally different note...my nanny and I were going over the schedule for next week and we both noticed that my 21 month old daughter was very quiet...because she had found my (brand new!) histology text book and a highlighter and I guess decided to "highlight" what she thought I should know, lol. Luckily it was just highlighter and amazingly I was able to easily wipe it off with a baby wipe! Sigh, this is definitely not a problem most other students will have to deal with! 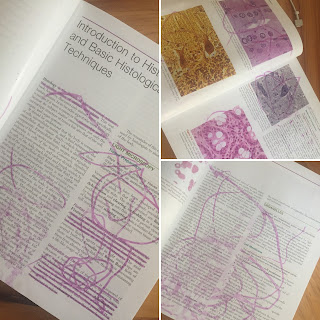 Tomorrow is the start of Orientation Week.

I knew that this time would go quickly and it has. I managed to get everything sorted out. Found the world's best nanny for my kids. Got a bunch of other items crossed off my To Do list. Still have a few left, but I also had a few surprises thrown in (including what looks like a cancer diagnosis for my 9 year old basset hound - however, until the biopsy results come back, I refuse to worry). I can't stress about it.

It just goes to show you that things DO work out. But there will be surprises along the way, may of which won't be pleasant. But I'll get through them, the best I can.

Luckily most of the O-week events are pretty low key and aren't going to last all day, so I can ease in to being away from the kids. I miss them already.

Wish me luck, though classes don't start for real until Monday.

Have a question you'd like to ask? Feel free to email me at:
mdorbust1@gmail.com
Please be patient for responses! I don't check this mailbox too frequently.